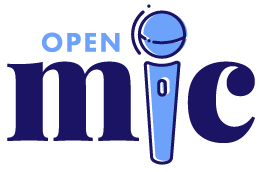 Before coming up with the idea, we did some research on other simple, interactive installations that have been done around the world. In 2018 the Extrapolation Factory held an event called “Pull-Tab Alley”, a project that asked the public what items they thought might be sold or sought out in future economies. Then the public created fictional pull-tab ads for these products and left them up on the walls of Cortlandt Alley in NYC.

This sparked the thought "What do Portlanders think the future of this city looks like?" So we devised a way to find out.

For Open Mic: The Portland Remix, we wrote a total of eleven prompts about Portland now or in 2040. We created Reverb, an Amplified mascot of sorts, and turned them into stickers to plaster the city with prompts and a QR code to scan and submit ideas. In the days leading up to the event, answers to our questions started flowing into our inboxes. We then printed out these prompts on colorful postcards and filled them out with the answers we received. We left the rest of the cards blank so people could fill them out at the event.

At the event, we set up the blank prompts with some Sharpies and four pieces of fence to clip answers to. We hosted a good old fashioned BBQ to bring people in and create a new connection with those who participated. By the end of the event, the fence had a lot of color on it with thoughtful answers written on prompt cards and clipped up for the public to read and reflect on. We left the installation on display during the day so passersby could contribute more ideas. At the end of the week, we held another BBQ so more people could add more ideas to the board and we could talk about the answers that had been said throughout the week.

Overall, the event successfully collected over a hundred ideas. We met some interesting people along the way. Some of my favorite responses were “Portland in 2040 looks like: a place where I can be myself regardless of my race, gender or sexuality”, “I will be laughing at traffic congestions in 2040”, and “If personal cars disappeared, there would be more room in our cities for… Ain’t nobody ditchin’ their whip!”

I also noticed the answer "Portland lacks diversity to make it a great city" popped up five separate times.

It was apparent from the answers that Portlanders see the possibility of advanced tech to improve the sense of community and the quality of urban life.

From what we can tell, Portland in 2040 looks like an extremely inclusive, diverse, and sustainable environment with less cars on the road and even more craft beer.